How to Get NBI Clearance 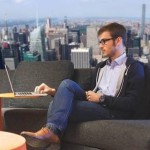 The online registration provides the best benefit of internet. Going online on the applicant’s own mobile device or internet connected computer is easy than sitting on a line or queue. We just need to go to this link and register. Sign up for an NBI account. After being registered, take note of the digital Reference number since this will be shown to the NBI branch or satellite office for the actual 2 step NBI clearance claiming. Seen above are the 2 steps to be done when at NBI branch office or satellite office. This includes photograph capture and fingerprint scanning. The last part involves clearance printing when there is no “Hit” or NBI criminal database match which means the applicant need to return to NBI Clearance window after 8 business days. You can take home the NBI clearance within just 10 minutes at this shortened process when not on “hit”.

To claim the NBI clearance the applicant still need to go to NBI office. There will be a need to bring at least 2 valid supporting documentation that proves your identity of NBI clearance recipeint. It is important to bring valid IDs that are accepted by NBI. Proof of payment is also needed, since the applicant already made an E-payment when setting up online NBI registration and appointment.

How Much to Get NBI Clearance?

Regarding the cost of applying for an NBI clearance, the NBI website has an announcement specifically about the fees to be collected. NBI will be charging a fee of Php130.00 per clearance certificate. Before, it was Php115.00 but it increased effective onward from March 12, 2018 to comply with BIR Documentary Stamp Tax (DST) rate adjustment. It was further explained that in pursuant to R.A. No. 10963 or the “Tax Reform for Acceleration and Inclusion (TRAIN) Law” and implemented with R.R. No. 4-2018 of the BIR.

NBI clearance application and claiming is a first come-first served basis being strictly implemented ever since. Claiming NBI clearance and registration involves proper dress code adherence. As much as possible,do not wear flip flops, slippers, tank tops and shorts to avoid denial of services. Under R.A. No. 9710 or the “Magna Carta of Women”, R.A. No. 9994 or the “Expanded Senior Citizens Act of 2010”, NBI will implement courtesy lanes to those stated above covered by the law and also for nursing mothers and person with disabilities. An authorization letter ca be provided when the claimant is not the NBI clearance owner, proving proof that he or she is authorised to claim the NBI clearance.

Blogging as a Hobby.

How to Register for Philippine Identification System?

How to Register for Philippine Identification System?